Please enter your username or email address. You will receive a link to create a new password via email.

The most well-loved village in the Val d’Orcia, Pienza 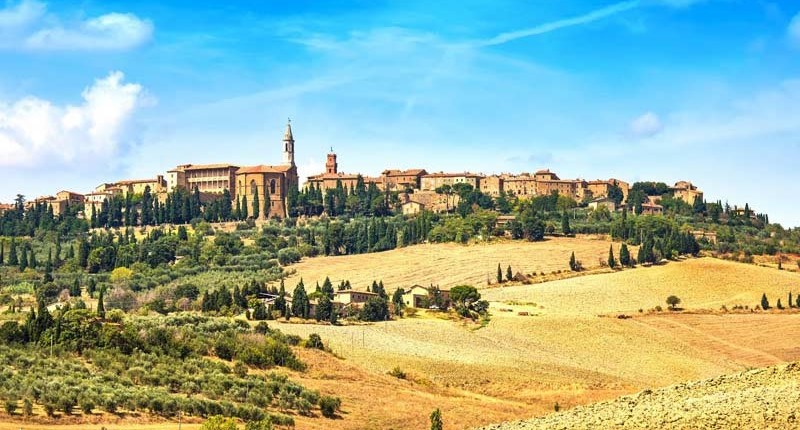 A village rich with cultural and artistic history, immersed in the most beautiful Tuscan countryside. I am talking about Pienza.

Pienza is a town in the Province of Siena, Tuscany, with a population of 2076 inhabitants. This small village is located South of Siena, amidst the fabulous views of the Val d’Orcia, a few kilometers from Montepulciano and 20 kilometers from Montalcino. During a trip North to Mantua, the clergyman stopped at his birthplace and, seeing its state of degradation, decided to intervene. He entrusted a grand renovation project to architect Bernardo Rossellino under the guidance of renown humanist Leon Battista Alberta.
The pope wanted to create his version of the “ideal city;” a Renaissance concept of a city which physically embodies the ideals and philosophies of the Italian classical age. 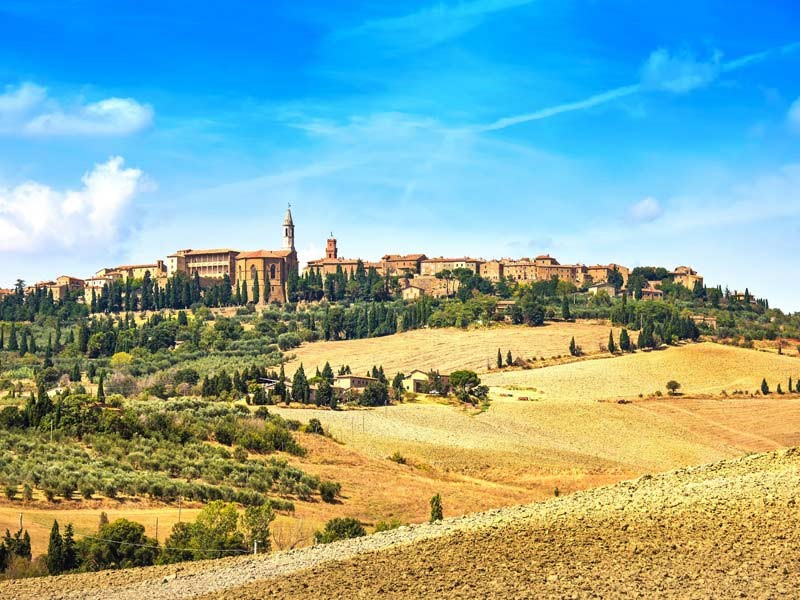 It took about 4 years to re-create the town with all of its harmonious forms and classical fifteenth century design. During these years, a beautiful central complex of buildings was erected: the Town Hall, Palazzo Piccolomini, and the Cathedral with its beautiful piazza. However, the pope’s untimely death meant that the renovation underwent some limitations and resulting modifications.

In 1996, the city of Pienza became a UNESCO site designated for natural, artistic and cultural heritage. In 2004, the area in which it stands, the Val d’Orcia, was also accepted to UNESCO’s site list.

ARCHITECTURE
Pienza is recognized as an “ideal Renaissance city” with most of the artistic and cultural heritage centered on the principal piazza, which is now dedicated to Pope Pius II. Architectural elements considered as prime examples of Renaissance architecture are the Cathedral, Palazzo Piccolomini, Palazzo Borgia and the Palazzo Comunale.

Piazza Pio II
The design for the main square was studied in detail by Rossellino who prepared the designs for the Cathedral in front of the Palazzo Communale, Palazzo Borgia, and Palazzo Piccolomini which became the pontiff’s summer residence.

Despite it’s relatively small size, Rossellino’s intelligent design offers the illusion that it is larger that it is. Entering the small square, one experiences a space that broadens on the side of the Cathedral. In fact, the piazza remains an irregular trapezoid of compelling grandeur. 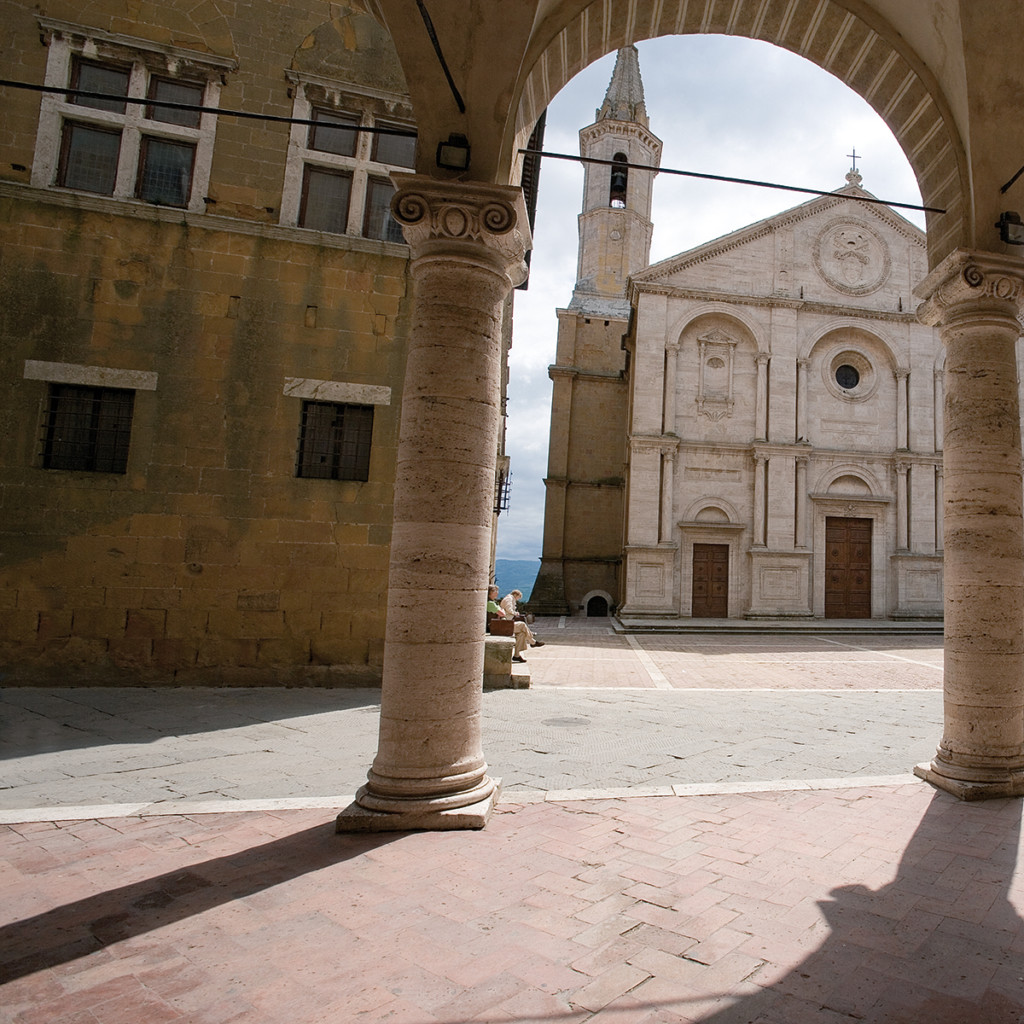 The Cathedral
The exceptional Cathedral of Pienza is the most important Renaissance monument. Recalling the Franciscan Gothic style with its gabled roof and central eye-shaped window, it was built as far south as possible, projected over the walls of the city in order to leave room for the piazza. Across the decorative wall surface above the entrance, known as the “tympanum” of the facade, the coat of arms was carved into the surface along with the Vatican emblem of Pope Pius II. Throughout the interior of the church, one finds numerous frescoes by the most important artists of the time. 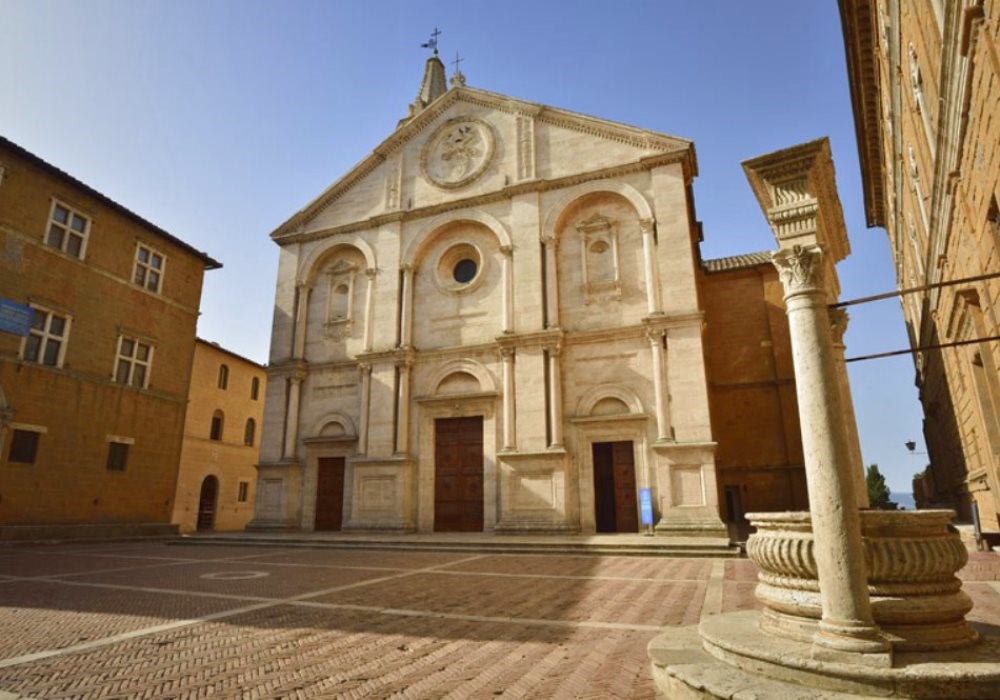 Palazzo Piccolomini
Palazzo Piccolomini, constructed in 1459 as the Pope’s summer residence, was made totally of stone in a square shape. A large door opens onto a magical garden surrounded by an arcade offering shelter from bad weather. From here you can enjoy an enchanting panoramic view of the beautiful Val d’Orcia. 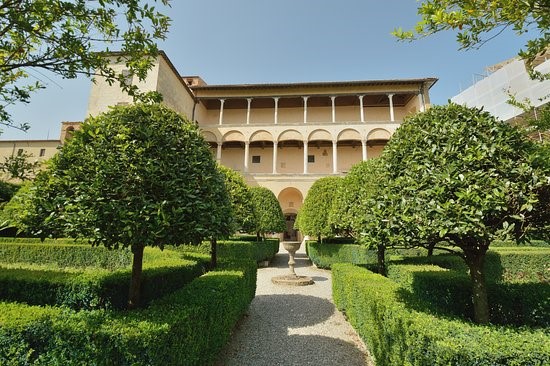 Palazzo Borgia
Next to the Cathedral, in front of Palazzo Piccolomini, we find Palazzo Borgia.
This is named after Cardinal Rodrigo Borgia to whom the palace was dedicated and donated. At the time, Cardinal Rodrigo Borgia was the Vice Chancellor of the Catholic Church and one of his close advisors. The palace became a papal residence when Borgia was elected Pope Alexander VI during the fifteenth century. Today it houses the Diocesan Museum. 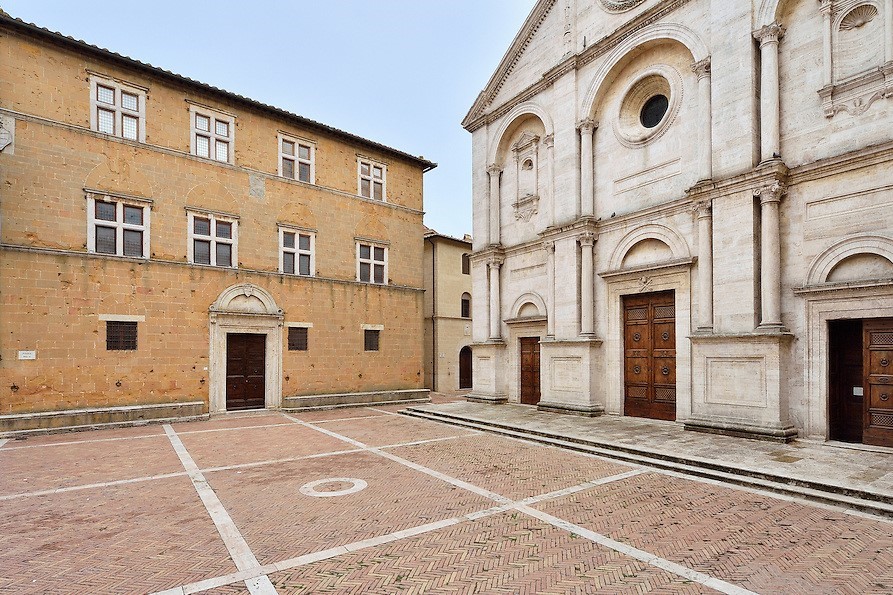 The Palazzo Comunale of Pienza
Finally, on the opposite side of the Piazza del Duomo is the Town Hall with it’s picturesque porch formed by three arches resting on beautiful Ionic columns. Additionally intriguing is the upper facade composed of four windows characteristic of the Romanesque and Gothic periods, and its mullioned windows. 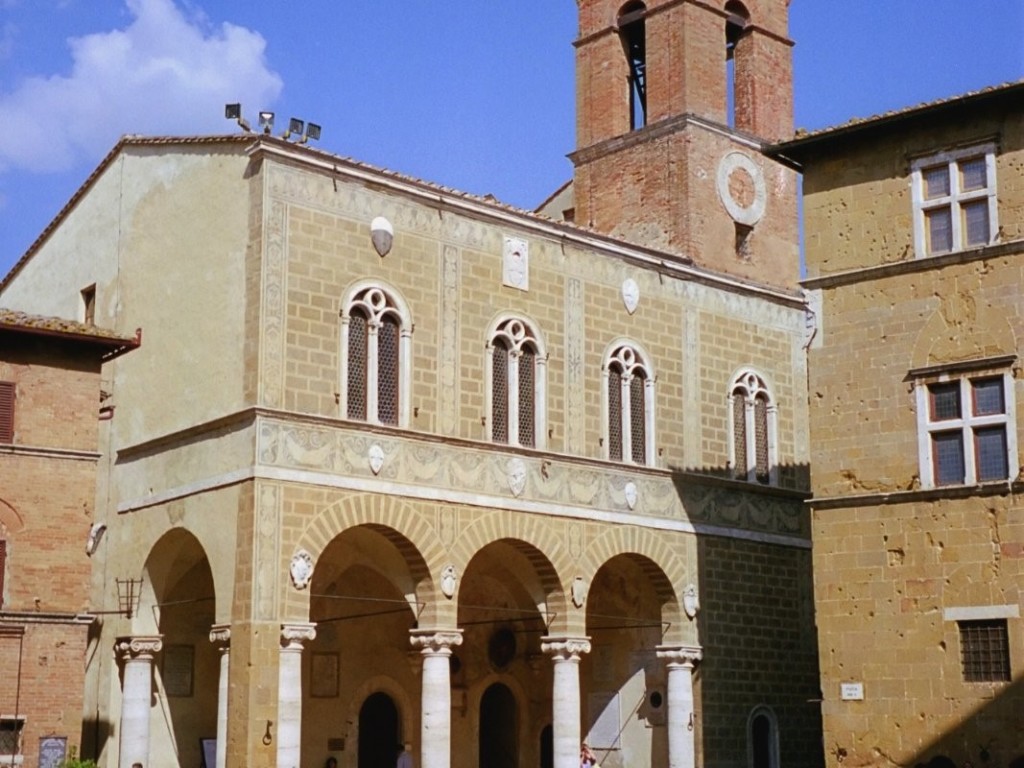 Pieve di Corsignano
Outside the walls of the historic center of Pienza, you can reach Pieve di Corsignano by taking a short walk from the village. It has a Romanesque style formed by three naves bordered by squared pillars. It was built in the 12th century and was where Pope Pius II himself was baptized. 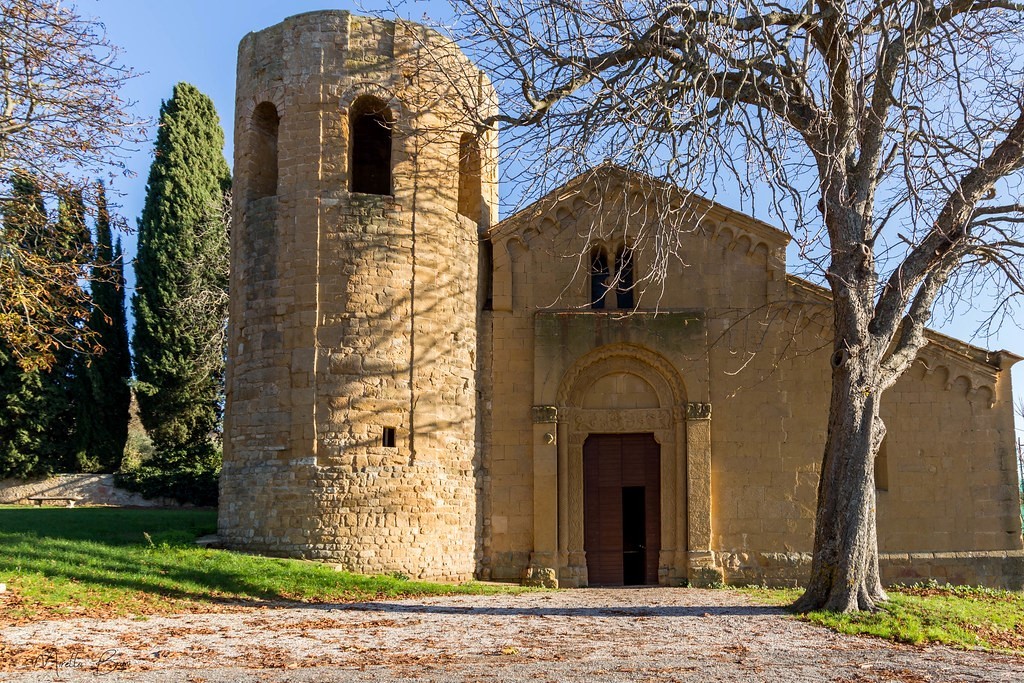 What fascinates tourists the most when visiting Pienza for the first time is the overall impression of having gone back in time. With its narrow alleys and tall stone buildings the town offers a unique and magical atmosphere as if we were immersed in a Renaissance city of a beautiful painting.

In addition to the undisputed architectural beauty of this village and the magnificent landscapes that surround it, Pienza is much loved by tourists for it’s cuisine, wine and artisanal products. Pecorino di Pienza cheeses, honey, and of course pici are beloved traditions.

For these reasons, many artists and celebrities choose Pienza as a tourist destination, ideal second home or even to make a movie. The incredible panoramas between Pienza and San Quirico are the site of a film that won five Oscars. From the famous fields of “Campi Elisiche,” the protagonist of The Gladiator dreams of finding his family again. 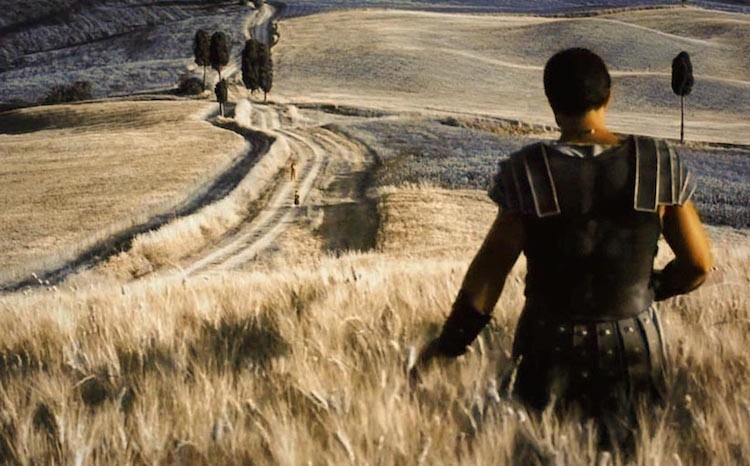 Now, all you have to do is come see for yourself what this wonderful area has to offer. I promise you will be intrigued.

Are you interested in finding out more or have a question? Write me an e-mail, I will be glad to help you!

Wishing you a colorful day!

ONE OF THE MOST BELOVED TERRITORIES IN TUSCANY

ONE OF THE MOST BELOVED TERRITORIES IN TUSCANY

Do you want to enjoy the classic Tuscan experience in a place with views that will literally take...